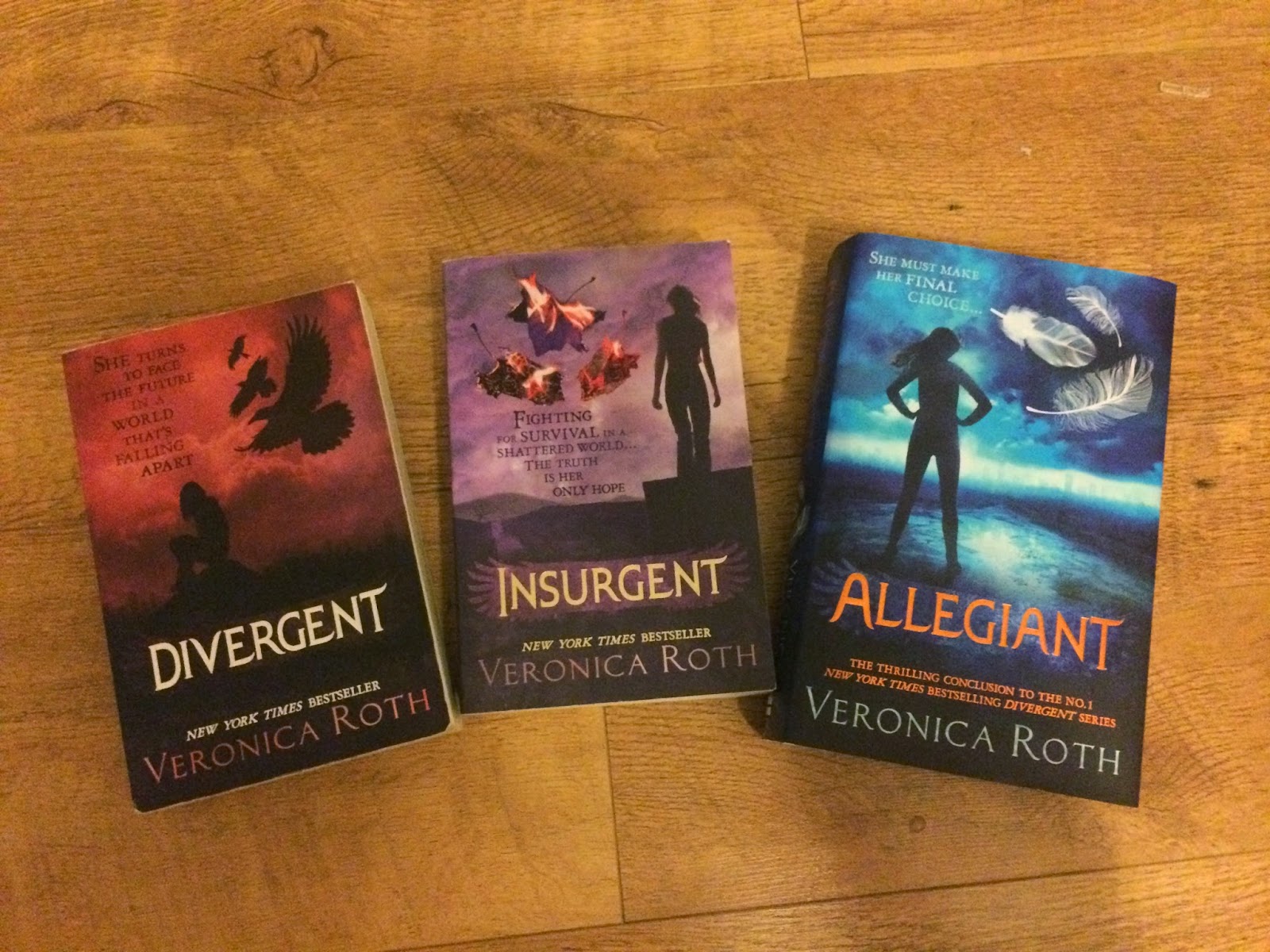 Okay, so if you don't want to know what happens in the Divergent trilogy, STOP READING NOW. This is going to contain a LOT of spoilers, so be wary as you read.

(You have been warned).


What can I say about this trilogy, other than I thought it was amazing!
I bought the first two books in the series, Divergent and Insurgent ages ago, and only got round to reading them recently, once I had purchased the third and final Allegiant. In fact, I read all three in the series in the space of about a fortnight! (Nerd, I know).
I'm still yet to see the film adaptation of Divergent. I'm a little nervous that it's going to have gone completely off track from the book, and I thought the book was just great the way it was.

If you've seen the film or read the books, you'll know that the trilogy follows a 16 year old girl named Tris, and a number of obstacles she must overcome due to her being 'Divergent' and the danger that presents in her society, beginning with the decision to leave her family and faction behind to start fresh in a new one.
There are five factions in the city with each containing their own dispositions that they must live by. Abnegation (the selfless), Amity (the peaceful), Candor (the honest), Dauntless (the brave) and Erudite (the intelligent).
Throughout this book, the underlying theme seems to be Tris trying to figure out who she is and where she belongs. At 16, I'm fairly certain everyone has gone through a phase similar to this, and it's an easy connection that we can make with Tris.
The book is filled with danger and anticipation as you get to understand the world Tris lives in, watch her adapt to her new life as a fearless Dauntless, fall in love with her initiation instructor, and risk her life to save others, while along the way losing people that she cares for dearly.
Out of the three, this was my favourite by far. I liked the idea that because Tris was starting a new life and learning a new way of living, that the reader was going through the journey with her and learning as she did.
It was also interesting to watch her relationship with Four develop. For a while it seemed to be a 'will it-wont it' kind of relationship which I was rooting for (and I'm sure everyone else reading was too).
The three books flow seamlessly into one another, which is something I feel makes the trilogy so unique. It all happens in a very short space of time.

Insurgent, the second book starts immediately after the first book ends, after a 'war' breaks out and most of Abnegation is wiped out by Dauntless soldiers under a mind control simulation, controlled by Erudite.
Tris, accompanied by her boyfriend Tobias/Four and a few others try and find safety with other factions, whilst constantly trying to escape Dauntless traitors.
After turning herself in to save her friends, Tris discovers the betrayal of someone she never could have imagined would hurt her so badly.
And then there's the cliffhanger ending that rips their whole world apart.
Like Divergent, the book is filled with anticipation and danger, but in a completely different way.
Tris isn't the same girl we new, after the events of Divergent, she's too scared to pick up a gun, and she's even lost the desire to live. She's reckless and puts herself frequently in danger, which puts a strain on her relationship with Tobias. Lets be real, if the one person you loved more than anything in the world was unnecessarily risking their lives, you wouldn't be thrilled either!
There is a different level of emotion to connect with, and the relationships of characters make you really involved (like when Christina finally forgives Tris for shooting Will, and their friendship becomes rock solid again. Yay!)

With Allegiant, I found that I couldn't put it down. I'd stay up until late at night trying to get to the end of the chapter, only to have to read the next one because of the cliffhanger ending.
To me, the change in direction with the book was quite surprising, but still really well written.
This book sees Tris and friends venture outside the gates of their little world, and meet a group of scientists who explain that their entire lives have been an experiment, to produce 'perfect' and 'pure' genes.
But their society is just as broken as the one Tris left behind, and their is yet more death and pain.
It's a little less easy reading that the first two, as some of the language used is too complicated and I just didn't understand what they were even going on about sometimes, and the fact that the chapters are from two different peoples perspectives (Tris and her boyfriend Tobias) confused me. I'd read a page thinking it was from one characters perspective and have to go back after realising it was the other.
The ending however, I was not expecting and took me completely by surprise. I'll admit it, I had a little cry! I disliked how it ended, because of the reasons I was meant to. But I also liked it because it was different and unexpected.
Out of the three, this was my least favourite, but I still really enjoyed it! It was just a bit too confusing for me.

Author Veronica Ross has written an incredible series, and I'm excited for what she has in store next.
She also has some shorter stories focussing around Tobias coming out July 2014 (next month), if your Divergent needs haven't been completely satisfied.